“Resilience organizing: a multilevel communication framework” is the result of a five-year study of Houston-area organizations following Hurricane Harvey, which ravaged the Texas coast in 2017. Hurricane Harvey’s financial toll, which was estimated at $125 billion by the National Oceanic and Atmospheric Administration, may well be exceeded by Hurricane Ian as individuals and businesses struggle to get back on their feet in the months and years ahead.

One of the study’s most important findings is that disaster recovery is not simply based on phases, but that time itself is an organizing mechanism of resilience processes. Staff members’ sense of urgency induced them to work even as they left their homes or worried about flooding.

“Clearly, disasters are serious – and expensive – business,” said Professor and Chair of the Department of Communication Marya Doerfel, who is the director of the SC&I NetSCI Lab, who directed the research. Doerfel and her team investigated a network of nonprofit organizations, examining their communication and coordination efforts to restore social services to Houston’s vulnerable populations in the immediate and long-term aftermath of Harvey. “We were looking for markers of resilience within this network and the organizations with which it has relationships.” While the research has been published in prestigious academic journals, the findings have real-world implications for both for-profit and nonprofit organizations. 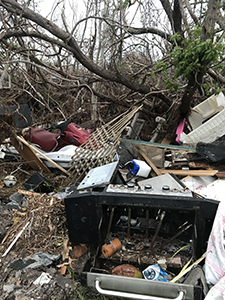 Disaster plans, which lay out policies, procedures, and lines of communication during crises, are an important, established part of business practices. However, resilient organizations are able to pivot as conditions on the ground change. Staff members in the nonprofit network stretched to find alternative means of delivering services and getting their facilities back into operation. Communication played an essential role in enabling staff to move smoothly into new roles as one of the organizational network’s leaders maintained close contact with staffers during the storm and then served as the agency’s main point person in interorganizational relations, for example, liaising with both city officials and other community leaders to access water, vehicles, and resources for service delivery.

“This agency executive was crucial in both making sure that the formal disaster plan, with its policies and procedures, was followed, and encouraging staff members to find new ways to solve problems as they emerged,” remarked Dr. Doerfel. “He trusted his staff, and in turn, they trusted him and one another.” This dynamic held true even though many of the staff members themselves were vulnerable during the storm. “They were able to work through their own disruptions because they believed so strongly in the organization’s mission of helping underserved communities.”

The role of “process experts” emerges during recovery.

Process experts are people who can stretch beyond their own boundaries to expedite work beyond their own expertise. They can activate their personal and professional networks to acquire resources and initiate or maintain partnerships. Doerfel’s team found that the role of process experts is most important after the initial crisis, when organizations enter recovery phases. “As the rain was bearing down on Houston, the focus was on the well-being of staff and which offices would be ready to reopen on what days,” Dr. Doerfel explained. “This shows that the initial focus was internal. But as soon as the organization began to stabilize, employees turned to the task of serving their clients. In many cases, this required improvised workarounds, for example, accessing pallets of fresh water and volunteer drivers to deliver it to the homebound. This is where process experts are at their best. They are able to create systems on the fly to solve these types of problems by activating relevant parts of their own and their organization’s networks. We found that the most resilient organizations were those already engaged in strong partnerships with others.”

Time is an organizing mechanism, not just a measure of efficiency.

One of the study’s most important findings is that disaster recovery is not simply based on phases, but that time itself is an organizing mechanism of resilience processes. Staff members’ sense of urgency induced them to work even as they left their homes or worried about flooding. During the storm and its immediate aftermath, there was a spike of productivity, as evidenced by the amount of work-related email sent during that time. As the waters receded, urgency diminished. Staff members had time to coordinate within and among offices, and to utilize interorganizational relationships to optimize mission-driven work.

Organizational resilience may be a two-edged sword, a predicament not lost on Dr. Doerfel and her team. “We depend on the resilience of organizations that care for the most vulnerable in our society and on businesses who can procure resources like food or buildings supplies after disasters,” she noted. “At the same time, we studied a nonprofit organizational network that was able to function even though its own employees were vulnerable to the ravages of the storm. In this case, organizational resilience was dependent on employees’ ability to push their own problems to the background.”

Another issue that arose was the relationship of resilience to process experts found in wealthier, often urban, organizations. These centers have greater capacity to plan and reserve resources, both human and financial, for crisis, and to use their partnership with other organizations and government when disasters strike. “We found that organizations that had process experts returned to work faster than those that lacked them” said Dr. Doerfel. “When employees, their organizations, and the organizations’ constituents efficiently return to normal functioning, it is easier for politicians to celebrate the resilience of their community rather than to turn their focus to real policy changes that might directly mitigate the serious threats to communities. Right now, the system is designed to keep the vulnerable, vulnerable, and the resilient, resilient.”

For more information about this study and the work of Rutgers’ NetSci lab, visit www.netsci.rutgers.edu.